My husband and I celebrated 16 years of marriage with a well deserved vacation in Paris a few weeks ago. We’ve been planning and saving for this trip for two years and finally saved enough. One of the major benefits of being affiliated with the military {my husband ended 10 years of active duty Air Force service in 2006} is having friends all over the world. Good friends of ours are entering their last year of work in Paris and were gracious enough to host us for a week this summer! Obviously, we needed to get over there to see them before they move on, so it was high time to make this vacation happen.

I’m so excited to share this vacation with you, as we had soooo much fun!

Our trip started on a Friday afternoon in St. Louis. We dropped our children off with my parents in Missouri – the older three kids attend a fine art camp at the community college where I teach every summer. They love it and we decided having them enrolled in activities for most of the day would be the easiest way to finagle babysitters for the 10 days we were gone. Thanks, MOM!!

As my hubs and I waited for our flight to Atlanta at Lambert Field, Atlanta experienced bad weather which closed the airport for a couple of hours. We waited in the terminal for an hour until Atlanta opened back up and then boarded our flight. Had we taken off after we boarded, we would have been fine, but because the entire airport had been closed, there was no place for our plane to land. So we waited on the plane on the tarmac for over an hour before we were finally cleared for take-off.

There were so many ANGRY people in Atlanta.I felt pretty bad for the airline employees and we tried to be as polite as possible, despite our frustration with losing an entire day in Paris. We stood by on the next flight, but didn’t make that one either so we had to stay overnight. And worse still, we had not packed an extra outfit in our carry-on bags, so we washed our stuff out at the hotel and wore it again… {The airline kept our bags.}

We had a heck of time getting on our flight with Air France. Delta lost our tickets {hmmm} and had to reissue them. I guess there was quite a lot of confusion because I booked our tickets directly from Air France. Delta saw records of our return flight from Paris, but not the flight to Paris. After a long wait, we were finally issued handwritten tickets and told not to lose them, under any circumstances. Good thing we got to the airport early!!

Finally, we made it on our 777 to Paris! While we were disappointed with the delay, spending the night in Atlanta wasn’t all bad. We were alone after all! It’s not that often that we are completely kid free!
We made it to Paris with little drama once we were finally on the plane. We did have a couple of tense moments when we realized that Dan’s bag didn’t arrive in Paris as promised. The French Air France worker said it was on the way and would be in that afternoon. They promised to deliver it to our accommodations, “Maybe today, maybe tomorrow.” Yeah. I wasn’t holding my breath on that promise!

Day One of our Anniversary Trip to Paris

But despite delays and baggage issues, we were in Paris! Check out that view! That is the Eiffel Tower as seen from our friends’ living room window! It was a glorious sight and I made sure to look at it each day we were there.

We arrived at our friends’ lovely apartment  by 10 am. It seemed so late to us, yet we had to stay awake. Our friends told us we were allowed a one hour nap in the afternoon, but that was it! 😉

To stay awake, we walked with our friends out to their local weekend market. We checked out our friends’ favorite bakery on the way to the market. I love French pastries. Aren’t they scrumptious looking?

And I loved the market. You could find anything you wanted there! Aren’t those gorgeous berries? I used to eat currants as a child in Germany. I’ve got a couple bushes here on my little homestead but they haven’t produced any berries yet. 🙁

Want to buy some duck meat? No problem!

Or maybe French cheese is more to your liking?

Candy always wins if cheese and duck aren’t on your list. Really, they had everything, including underwear, jewelry, and bags!

After the market, we headed home for lunch and our promised nap. 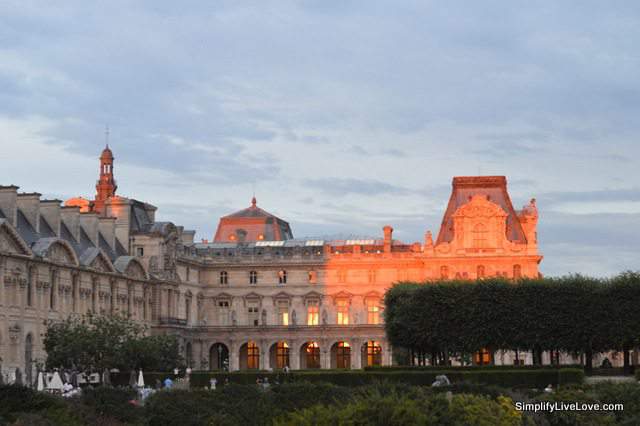 After our too short nap, we hopped on the Metro and headed for the Jardin des Tuileries {Tuileries Gardens} – beautiful gardens located between the Louvre Museum and the Place de la Concorde. We met up with some ex-pat friends, Brits, Americans and Australians, had a picnic, watched the sun set, and drank too much wine. It was a really glorious evening.

We found a Summer Carnival near at the Jardin des Tuileries , which you can read about here, if you’re curious. We skipped the carnival, but the 2 kiddos we were with eyed it longingly. 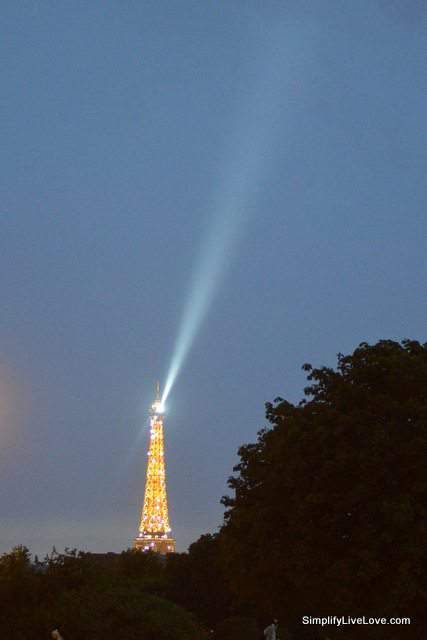 We sat and watched the clouds roll in and the sun set. At 10:00 pm, the Eiffel Tower came to life with a sparkling light show! We learned it does this every hour on the hour (until 2 am), starting at 10 pm. It was gorgeous and I have a short video on Instagram, if you’d like to see it sparkle too!

And then it started to rain. And one of the ex-pat friends just happened to own his own bar located not far away that we all ran to. How lucky was that? Well, we sat there for a while and drank more wine, too much wine. We took a taxi home and went to bed. The next day, I spent the day recovering from too much wine and finished grading my college class as final grades were due while we were in Paris. But, Tuesday, we came back to life and saw some more awesome sights.

I’ll share them next week! Stay tuned for pictures from our wonderful trip out to Versailles! On Tuesday, we toured Versailles: the palace, the gardens, Le Petit and Grand Trianons and also the Hameau de la Reine – the hamlet Marie Antoinette had built so she would pretend to be a peasant. I visited this place as a child with my parents and wanted to see it again. It did not disappoint!

Have you been to Paris? I’d love to hear about your favorite sights!

first of all - Congratulations!!! Looks like you did it right! Lovely trip!

I spent a day in Paris when I was traveling during college - took the night train from Amsterdam and tried to hit the "highlights" - the Eiffel Tower, the Notre Dame de Paris, see the Mona Lisa, and Jim Morrison's grave. :) The things I remember from that day trip were the DIVINE cheeses, flaky croissants and some of the best coffee had had drank during the six months that I was traveling. :) Then ... back on the train to Amsterdam. :) It was great. I can't wait to go back again.

It looks like you really enjoyed yourself and although we only live a short hop from Paris I am ashamed to admit I haven't been there since I was 15! Looking forward to seeing the rest of your holiday pictures