My mother gave my son this butterfly pavilion for his 5th birthday last November. He was super excited! We called him the butterfly stalker last year because he could literally sneak up on butterflies and catch them with his bare hands (very gently)! We he got this in November, he wanted to get the caterpillars right away. But, we waited to get them because we wanted to be able to release them into the wild and they can’t be released until the outside temperature is over 55 degrees. Winters in Iowa aren’t butterfly friendly.

The kit from Insect Lore came with a huge butterfly “cage” and a coupon for butterfly caterpillars. We did have to pay a $5 shipping fee, but it was worth every penny! 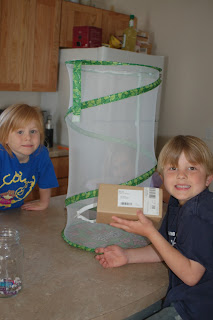 On May 3, our caterpillars arrived! They came in two cups with a special “nutrient” at the bottom so we didn’t have to feed them anything. Phew! 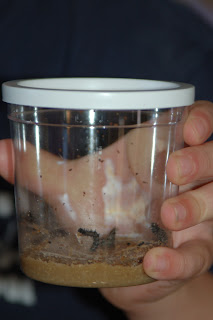 Here’s how small they were when they first arrived. There were 10 caterpillars total. 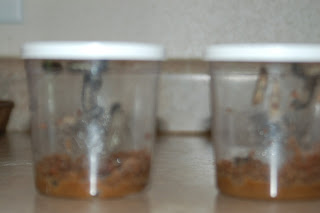 It was so hard to get a decent picture of the caterpillars because my camera wouldn’t focus. I couldn’t even manually focus it. In retrospect, maybe one of the kids should have held it like they did for the picture above.  Anyhow, after looking at these pictures again, I am AMAZED at how much those little caterpillars grew in a week! Can you tell the difference between this terrible picture and the one above? 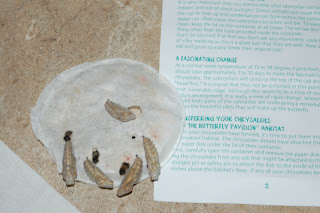 After a week, they formed their cocoons. 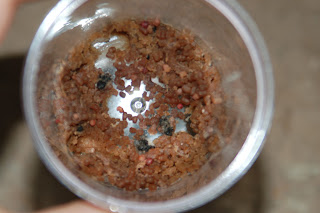 This is what was over – nutrients and poop – in their original homes. 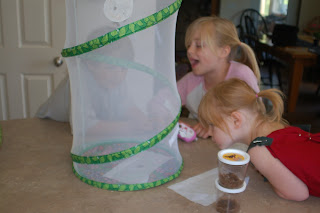 After they had all formed cocoons and we thought they were hanging quite solidly, we moved them into the butterfly pavilion so they could emerge. One cocoon had actually fallen from the lid of the jar. So, per the instructions, we placed it on a tissue on the bottom of the cage. When we did this, it started to shake violently and roll around! We thought it was about to emerge as a butterfly, but it didn’t. And we learned several days later that that behavior is normal behavior to deter predators… (oh well…) 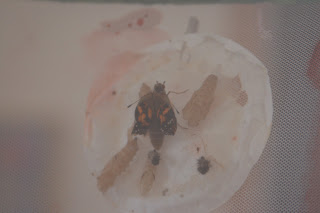 On Sunday, May 22, they started emerging and by May 23 they were all out! Here is the last one literally crawling out of the cocoon! We were lucky enough to see two come out. They others were very sneaky and emerged undetected. 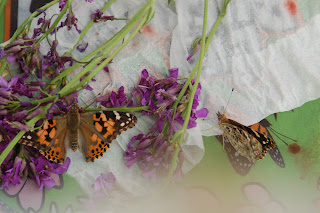 We fed them sugar water on flowers until their wings were dry and they were flying well. 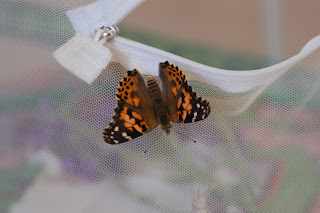 And here is one of our 10 beautiful Painted Lady butterflies ready to fly away! They are gorgeous.

Interesting facts we learned during this process:

Yesterday, we let all 10 butterflies fly away. And this morning, one was back! But she has since flown away again. I doubt she’ll be here tomorrow. The kids named a few of them: Rocky and Sandy are two names I can remember.

It was truly a fun experience. We’re trying to figure out what to do next. I’m thinking maybe a praying mantis pagoda. A friend did this with her kids and said it was fantastic. What do you think? Have you ever done something like this? I highly recommend it, whether you homeschool or not!

My kiddos got this for Easter from my mom and dad. I just found the coupon for the caterpillars...phew! Can't wait to try it - looks like fun! I just got a Kid's Gardening book from Menards - so many fun things in it. One is a bee pot. I think we may try that this summer. My son really wants to make a time capsule - I have a feeling we will be making three:)

Oh this sounds so much fun! I think we will try this!