Well friends, we moved into our barn in July of 2013 and have now been living in it for an ENTIRE YEAR. It’s hard for me to believe it’s been that long, but it has. We’ve accomplished an awful lot around our little homestead this past year, and I’d like to take you on a tour of some of the events from the past year. 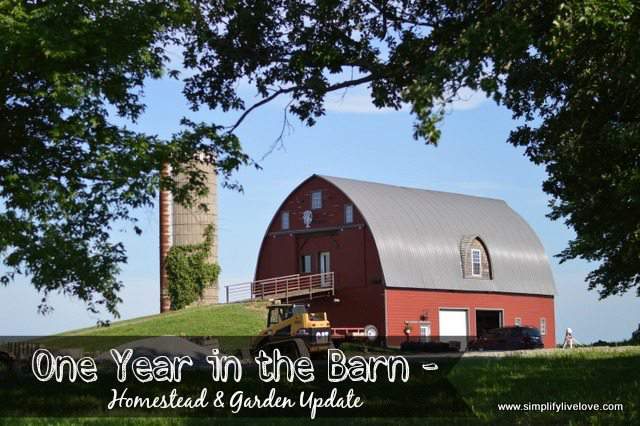 Well friends, we moved into our barn in July of 2013 and have now been living in it for an ENTIRE YEAR. It’s hard for me to believe it’s been that long, but it has. We’ve accomplished an awful lot around our little homestead this past year, and I’d like to take you on a tour of some of the events from the past year.

One Year in the Barn – Homestead & Garden Update

The biggest accomplishment is the Passive House we are building. {Curious what a passive house is? Read this.}

That’s it right there! The great thing about being married to a fabulous home builder/remodeler is SOME DAY I will get to live in that beautiful beast of a house. The bad thing about being married to a super talented home builder/remodeler, everyone else’s home projects come first. That means progress on our house is slow going. But we have made remarkable strides in the almost year since we started the house. We dug the hole last August, right after we got back from Paris.

Considering we had the worst winter on record in so, so many years, considering our windows were delayed by over a month from Europe, considering the hubs has never used many of the building materials he’s using or built a passive house before, I’ll take it! Windows are in. Interior framing is almost done. Exterior of the house is almost done. Insulation has been started. We’re making progress. I’d love to hope we will be in it by Christmas. We’ll see.

In the meantime, I’m kind of taking this time in the barn as a time to kill everything, so to speak. My dishes keep breaking, my towels get more stained every day, and more and more stuff is sent to Goodwill.  I’m getting new furniture, new linens, and new dishes when we do finally move into the new house. After almost 17 years of marriage and 4 kids, our stuff is just looking a little shabby. I’m taking trips to Ikea, making wish lists, and dreaming. We’ll be living in that house soon enough.

Last August, we also got a beautiful puppy –

Nora, the Great Pyrenees. After having raised labs and goldens for Guide Dogs for the Blind, we weren’t sure what we would think of a new breed, but she is the PERFECT dog. We’ve had the normal puppy challenges with her – chewing and chasing cars, but over all, she has been a complete delight. I will never go back to labs and goldens.  Don’t let this picture fool you – she is quite the homestead protector. What an absolutely delightful dog! <3

Also in August, we got pet rabbits.

And they multiplied. Several times. What they say about rabbits is true, my friends. LOL! Luckily, or unluckily as the case may be, we’ve turned out to be absolutely terrible rabbit tenders and we’ve had a low survival rate of the babies. Poor bunnies. The babies are seriously the cutest things you’ve ever seen, and I really hope we can figure out what we’re doing wrong to help them keep their babies alive a little bit better. Or better yet, prevent them from having babies in the first place. Since we don’t really want to eat them, I think it’s better that momma rabbit just stops having babies. And we’ve stopped that process for the time being. WHEW!

In April, I started planting my garden.

We’ve had the craziest weather this year – over 6 inches of rain in the last week alone. But I’ve been harvesting onions, peas, lettuce, kale, cucumbers, zucchini, cabbage, eggplant, and herbs, as well as a few strawberries {new patch started this year}, and I just started digging a few seriously delicious new potatoes. Oh yum! Gardening is one of my passions for sure.

The biggest challenge I’m facing right now is that the cucumber beetles are back. I’ve been chatting with friends on Instagram and continue to use the Diatomaceous Earth as my chief method of killing. I’m hesitant to use the DE because it also kills bees, but I need to keep my cucurbits alive long enough to get a harvest. Since the cucumber beetles are really vile little creatures that don’t share, they have to go.  While I am using DE, I am taking steps to minimize its impact on the bees. If you’re battling cucumber beetles too, read this post for some ideas on how to stop them. I’m always trying something new and will update at the end of the season on how it all worked out for me.

In May, we got 18 darling baby chickens!

I now feel like a bonafied homesteader {since we have some sort of livestock to tend…} They are 7 weeks old and just an absolute hoot to watch. We’ve got 2 White Sultans {roosters, apparently}, 5 Black Australorps {4 hens & a rooster}, and 10 Auracanas {9 hens & 1 rooster}. For mother’s day, Dan moved an old 2 stall pig building out here and we’ve been retrofitting it for the hen house. It still needs the nesting boxes attached and a roosting bar. But I love the way it looks and it functions very nicely. We started the chicks out in my barn kitchen and moved them out to their house when then were about 4 weeks old. After leaving them locked up in there for about a week, we added the fence and started letting them out. Nora wanted to eat them for a while and we were concerned about letting them free range, but she’s doing good now and leaving them alone. We started letting them out completely yesterday and they are doing great.

Also in May, we moved our driveway.

Our driveway used to go down that grassy area in the left in the picture, but it was always such a mess after the rain. It didn’t matter how much gravel we dumped down there, come a big rain, the gravel was gone with only mud in its place. Dan finally had enough and got permission from the county to move it. I was surprised we needed permission, but I suppose I shouldn’t have been. The county folks came out to inspect, we had to get a permit, yada yada yada, but they approved and one day in May we had a bulldozer, 4 skid steers, two tractors and two dump trucks out here moving dirt and making a new driveway. And let me tell you, the new driveway ROCKS! What a difference it makes in being about to get off our property after a big rain. After all the rain we’ve had this year, I really shudder to think what it would look like around here if we still had the old driveway.

While it may feel like we haven’t accomplished a lot in the year we’ve been here, we really have. Living on our 5 acres in the country makes putting up with the inconvenience of living in a barn totally worth it. I will never live in town again. At least not in the near future. I can’t tell you how much I love not having many neighbors.

In the next year, we will move into that Passive House! We will continue to clean up around our little acreage and maybe add more livestock. I have my heart set on a few little piggies but I am meeting resistance from my husband. The fact that we also travel a lot is a major problem. It’s hard to find people to tend the homestead in our absence, but we’ll figure it out!

And that’s what’s been going on around here! I hope you have enjoyed the update. Until next time, Friends! Thanks for reading.

Michelle Marine is the author of How to Raise Chickens for Meat, a long time green living enthusiast and rural Iowa mom of four. An avid traveler, Michelle has lived on three different continents and has driven all four kids across the entire USA (by herself!). She loves sharing farm-to-table recipes, their family travel adventures, and gardening and homesteading tips on her popular lifestyle blog, SimplifyLiveLove.com.