I’ve been giving my crockpot a workout the last couple of weeks. It’s helping me a lot to get dinner on the table at an earlier time. Honestly, we usually eat kind of late – around 7 pm, but with 3 kids in an assortment of sports, activities, and practices, it’s really important that I feed my family earlier right now. I’ve tried out a lot of different recipes recently, and this one, Scalloped Potatoes and Bacon for Slow Cookers, is a winner! 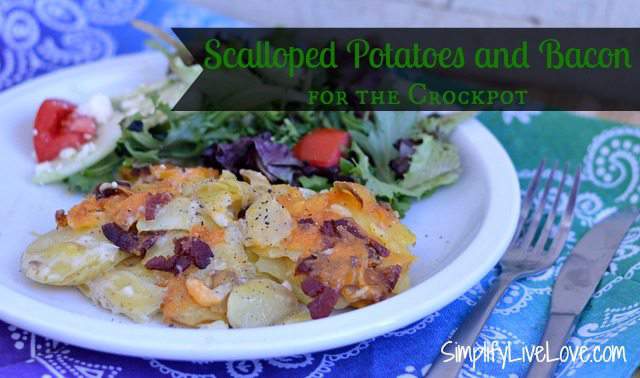 1. I made my own homemade version of cream of mushroom soup out of milk, bouillon base, and flour. Feel free to use one can cream of mushroom if that's your style (or, if you'd like a creamier version, add two cans.)!

2. You can also use ham instead of the bacon. I had some leftover bacon pieces that I needed to use up so I used them. I was so pleased with the results that I would certainly use bacon again! But I normally make scalloped potatoes with leftover ham, so I know that ham would also be quite nice in the recipe.

3. I used my food processor to cut the potatoes quickly, thinly, and uniformly. My organic potatoes had such a thin skin that I did not peel them. I would peel them if they had a thicker skin though.

4. Finally, if you'd rather bake this in the oven, that works too! Bake it at 350 degrees for about one hour.

I won this Better Than Bouillon Mushroom Base

from a blog giveaway! I was really excited to try it out and I highly recommend it. It makes homemade cream of mushroom soup a snap!

Do you have a favorite crockpot recipe? I’d love to hear! My crock pot is one of my favorite kitchen appliances.