We have now made it three whole weeks in the reclining spica cast! Only three more to go, and Sara will be cut out of that nasty thing. I thought I’d share a bit of the hassles we’ve been dealing with the last three weeks so you can devise better plans…if you’re also facing a reclining spica cast.

Her cast is fiberglass over plaster. When she first came out of surgery, it was just the white plaster. A few days later, they put the colored fiberglass {she chose pink & purple} over it to protect it a bit more. Here’s Sara’s cast from the back. Notice the big handle bar on the back. I’m not sure what it’s for, but it helps me get a better grip on her when I pick her up, so I guess I’m glad it’s there.

Here it is from the front. I think the bar in the back also takes pressure off the cast and it helps keep her left leg elevated.

We have lots of problems with the cast, mostly itching and rough edges. The CastCooler®

(this post contains affiliate links which means I earn a small income from your purchase.) helps a lot with the itching. If you’re facing a spica cast, I highly recommend it! To soften up the rough edges, we applied Extra Heavy Moleskin

over every opening. The hospital gave us a lot to bring home, but you can also buy some if they won’t give you any.

To keep the mole skin on, we covered with patterned Duck Tape

. – we love this retro owl tape. It goes nicely with the pink and purple cast. 😉

Going to the bathroom has been a huge challenge. Clearly – she can’t sit on the toilet by herself. And it’s hard for me to both hold her and wipe. And when she goes to the bathroom, that bar totally gets peed on. It’s pretty rough. We do have a bed pan, but it doesn’t work well either. I was just looking at this Female Urinal

– it might actually be handy if it’s small enough to fit nicely between her legs which don’t spread. If I had known about it from the beginning, I might have ordered it. But with only 3 weeks to go, I think we’ll just keep plugging along the way we’re doing it with the understanding and expectation that this cast will just be nasty when it comes off. 🙁

Travel’s also been a huge problem. She has to wear this harness since she can’t sit up. Strapping her into the car means lying her down on the back seat of my van.

This was coming home from the hospital. It takes two seat belts and a lot of pillows to strap her in. She’s got three points on the harness that the two seat belts go through.  I’m not really thrilled with the end result. It’s so cold, so hard to get her in and out of the van, and such a pain to strap her in, that she’s had about 5 van rides the whole time she’s been in spica. We headed home to Missouri for a few days after Christmas, but we’re not going anywhere now that we’re home.

Hair has also been a huge problem. We weren’t allowed to put it up for her surgery and didn’t prioritize brushing her hair after her surgery. She left the hospital with a huge, tangled mess. 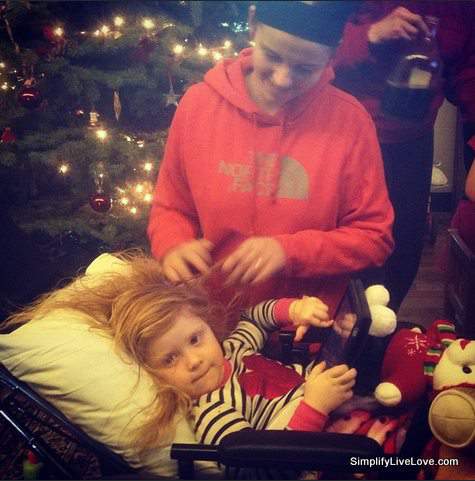 , we finally gave up and cut the matted hair out.

The last problem is sitting – she just can’t do it {I guess that’s the whole point of a reclining spica cast, eh?} unless I balance that bar on one of my legs. You can image how nice that feels. 🙁 We don’t do it a lot – but a few times a day she is perched on my leg like that.

The silver lining in all of this – we’re half done! Only three weeks to go. Even though everyone’s spirits are considerably better than they were when I last updated, we are so ready to be spica free.

If you’ve been through spica life – I’d love to hear any tips you may have! How did you keep your baby comfortable and everyone sane?

Need more information on DDH and Spica Cast Life? These posts might help:

What to expect on Hip Surgery Day

How to entertain your toddler in a spica cast

We are going through this right now. On thenplus side it's. My son, therefore peeing is naturally easier. He was not night time trained yet so we are having a problem with diaper placement and now urine getting on the cloth part if the cast.

we were told to double diaper. a smaller disposable size placed next to skin and gently tucked up under cast covered by a larger disposable diaper. beware the smaller diaper does not hold as much so be prepared to change often. one post even used an additional layer such as a urine pad (poise) for extra absorbancy. we are five days In.

Thanks so much for these posts! My daughter Maggie (16 months old) is supposed to go in for femoral osteotomy in a few weeks. We'll do first one leg, then the other She already spent 4 months in Spika at 3 months old, so I feel like I shouldn't be complaining too much, but now Maggie is walking and talking and immobilizing her feels more traumatic. :( It's really helpful and encouraging to read about your and Sara's experiences. I'm looking forward to your next posts, and I wish Sara the fastest recovery ever.

Oh I'm so sorry, Pavlina. I kind of dropped the ball on these posts, but my daughter is now out of spica and trying to run again. I really should keep this series alive. Good luck to you! And if you're not on this facebook group - I hope you'll join. It's a fantastic group. https://www.facebook.com/groups/Hiptoddlers/ <3

how cute is she

awwwwwww hope she gets better <3 she is so adorable

I'm amazed reading your trials to keep your daughter comfortable, wow, poor sweetie. Glad it's almost over for her and your family with the spica. Best of luck for total healing.