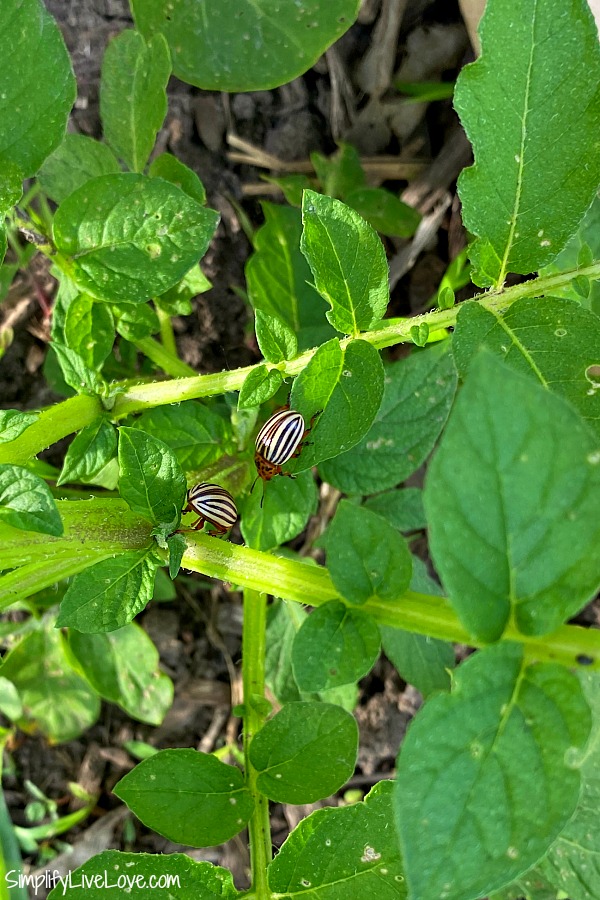 What is The Colorado Potato Beetle?

Adult Beetles are quite large and are yellow with ten white and or black stripes. They are easy to grab and drown, or grab and squish, or grab and feed to your chickens. Chickens think garden bugs make delicious snacks.

Eggs on the Underneath Side of Leaves

If you see two adult beetles on top of each other, beware. They are mating and the next step will be for the female to lay as many eggs as possible. The eggs are yellow in color and are found on the underneath side of leaves. The eggs hatch into beetle larva which will happily attack your potato field.

Beetle larva
The larva are reddish bugs with black spots. They start out very small, and get bigger as they grow into adult beetles. As they grow, they eat the leaves of their host plant.

How to Kill the Colorado Potato Beetle Organically

I’m having a lot of trouble with bugs in my garden this year. So far, I’m battling the Cucumber Beetle, the Colorado Potato Beetle, and I’m also working on Squash Bugs and Japanese Beetles. It’s a bad, bad year for beetles.

I really try hard to maintain organic methods in my garden. I don’t want to smell the chemicals, ingest the chemicals, or feed them to my kids. A lot of bugs have also developed resistance to chemicals anyway, and I also don’t want to kill all the good bugs that are working in my favor.

First, cover your potatoes with straw mulch – mulch encourages good bugs to move in – bugs that eat the Colorado Potato Beetle. Straw mulch is also good at covering the potatoes to keep them from turning green, and helps to control moisture too!

Get ’em while they’re larvae

Next, pay attention! I had never heard of the Colorado Potato Beetle until my friend told me that SOMETHING was eating her potatoes. Once she told me that, I took a long, slow walk through my potato plants and found the beetle larvae. I still have not seen an adult Colorado Potato Beetle, but for days I walked through my potatoes and killed every single larvae I could find.

Some were bigger, like the fatter larvae in the pictures above, and some were smaller – like this tiny one pictured here. To kill them, I handpicked them. Some, like this teeny one, I squished between a leaf.

Others, I drowned in a bucket of soapy water. Since I didn’t want to touch some of them, I just removed the entire leaf and dropped it all in the water. Then, I made sure to remove the leaf from the bucket, so they would be sure to drown. Aren’t they nasty looking?

Plant potatoes early in the season

Ideally, plant potato plants as early as possible so that they bloom before June. If you do that, some damage from the beetles won’t be enough to impact the yield of your plants. In Zone 5, potatoes can generally be planted by mid April, sometimes even by late March if the ground can be worked. To speed up the planting, cover your ground with plastic to help it warm up.

Next year, I will rotate my potato crop at least 200 feet from its current location. I’m also thinking seriously about introducing some parasitic nematodes

to my garden to help with bug control as well. I have read that they will help with all kinds of garden pests – cucumber beetles, Colorado beetles, and even Japanese beetles! I need these nematodes in my garden for sure.

Colorado potato beetles lay their eggs on the underneath of leaves. They are narrow and yellow and they make delicious ladybug food. So another prevention method is to release ladybugs in your garden!

I haven’t seen a Colorado Potato Beetle or Larvae in a couple of weeks. I am still patrolling daily with eagle eyes to make sure they stay away. I’m pleased that they seemed relatively easy to get rid of and thankful that my friend made me look for them. If they had matured and laid more eggs, I’m sure they would have been much harder to destroy. And who knows, next week, I may be singing a different song, but today, I am happy that I haven’t seen any evidence of these nasty bugs for many days!!

And look what I harvested from my garden today! Oh yum! I’m looking forward to fried potatoes tonight!

For a more in depth discussion of the Colorado Potato Beetle, head over to the Vegetable Gardener’s website. They discuss other fun methods for destroying this nasty pest.

How to Kill Cucumber Beetles Organically

Where to Find Free Mulch

Companion Plants You Need in Your Garden

Gardening for Beginners Made Easy

Have you dealt with Colorado Potato Beetles? What did you do to kill them?