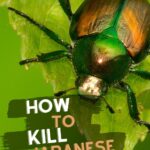 If you’re wondering how to get rid of Japanese Beetles you might try a mix of the seven organic methods listed below. Japanese Beetles are a huge problem in gardens and lawns across the Midwestern and Eastern United States – you’ll need lots of different methods in your arsenal in the war on Japanese Beetles.

How to Get Rid of Japanese Beetles Organically

Are you noticing metallic green beetles with a copper colored body flying or crawling around? See skeletonized leaves? Sounds as if you have Japanese Beetles and they’re after your roses, your ornamental shrubs and your garden.

If Japanese beetles are wrecking your garden, you are not alone. This invasive species consumes the leaves, fruit, and flowers of more than 250 different crop and ornamental plants. It’s imperative to get rid of Japanese Beetles as quickly as you can because they multiply overnight and are total destruction.

Welcome to the HOW TO KILL GARDEN PESTS SERIES!

Who knew gardeners could take such pleasure in murdering annoying garden pests. If you garden, you’ll want to check out on the posts in this HOW TO KILL series. I’m adding new posts to this series each week, so subscribe to my newsletter if you want to know when they’re ready!

What is a Japanese Beetle?

The Japanese Beetle is a root eating grub that develops into a leaf eating beetle. Japanese Beetles first came to the Eastern US from Japan in the early 1900s, perhaps hidden in garden bulbs.

Since then, they have slowly been making their way west. Japanese beetle infestations destroy rose bushes, many different types of fruit trees, deciduous trees, shrubs, and all sorts of garden crops as well. They have been an invasive terror for gardeners across the country since their discovery.

Honestly, they’re kind of pretty. Japanese Beetles are ½ inch in length with metallic blue-green heads, copper-colored backs, tan wings, and small white hairs lining each side of the abdomen.

Japanese beetles usually feed in groups. They lay eggs in the soil during June, which develop into tiny white grubs with brown heads and six legs that are up to ¾ inch in length.

These grubs remain underground for about 10 months, overwintering and growing in the soil. Even the grub stage of Japanese beetle larvae is damaging because over the two month period in th spring, the larvae feed on grass and plant roots.

They emerge from the soil as adult beetles and begin feeding in the late spring or early summer. They usually attack plants in groups, which is why damage is so severe. Although the lifecycle of the adult Japanese beetle is barely 40 days, they cover a lot of ground. Even if you succeed in controlling your Japanese beetle population, your neighbor’s Japanese beetles might come on over.

During their adult lives they will do nothing but eat and reproduce.

To make matters worse they will send out a pheromone which tells all the other Japanese beetles where the good food is and all their friends come on over, ready to have more babies.  After mating, the females crawl underground to lay about 50 eggs and start the whole cycle over again.

If it gets too chilly the eggs and grubs will overwinter…waiting for next year before emerging as adults in early summer where they will feed and look for mates.

How to Kill Japanese Beetles Organically

If you’ve ever dealt with these pests, you know it is imperative to get rid of them ASAP and there are a lot of methods you can try as well as some methods that don’t work.

There’s one method I absolutely DO NOT recommend and several that I do. Make sure to read through all of these organic ways to kill my most hated garden foe. I’ve found it takes a combination of several of these methods to really keep these guys under control.

Using Japanese Beetle Traps is the one thing I DO NOT recommend doing.

Many people hang pheromone traps from the beginning of June through the end of August to attract and kill Japanese Beetles. These dumb bugs can fly up to six miles looking for some love and  “come eat my plant pheromones.”

Adding a pheromone trap is like offering free Drakar Noir in the early 90s. Don’t do it. You will wonder what you were thinking as you empty bag upon bag full of dead, stinking beetles. Studies show that pheromone traps lead to more destruction – so you will want to avoid this method.

The only sure way I have found to get rid of Japanese beetles is to hand pick them off plants in the early morning. I like to carry around a mason jar with a little bit of dish soap and water in it and drop them inside.

They’re a little slow and it’s pretty easy to hold a jar of water under them and then flick them right inside. Once they get it, they have a really hard time getting out.

When I finish beetle hunting, I put a lid on the jar and place the jar in the sun to let the beetles cook. It gives me great pleasure to cook the jerks. I may be a little vindictive when it comes to these bugs.

You’ll want hunt for these nasty buggers every day without fail or you’ll start see more and more of them.

If you have a large infestation, place a white sheet on the ground beneath your plants.  Shake the bushes knocking the Japanese Beetles onto the sheet.  Drop the beetles into a gallon of water. Don’t forget to add dish soap to water.

Spraying with Neem Oil can stop them eating your veggies. An added benefit is when they eat Neem Oil it makes it so their eggs will not hatch.

Milky Spore is a powder you can put down in the fall or early spring. It’s supposed to kill the grubs before they can develop into adults. The good thing about Milky Spore is as it kills grubs and the grubs decompose, they release millions of new spores which multiply to kill more grubs.

You can also purchase boxes of beneficial nematodes from Amazon and many garden centers. This powder contains microscopic critters like spined soldier bugs, assassin bugs, wheel bugs, and ground beetles which destroy Popillia japonica grubs and eggs in the soil. There are different types of nematodes, so make sure you get the variety suited for Japanese beetles.

Nematodes give immediate protection and Milk Spore is a longer term solution. If you have a big enough infestation, you might want to try both.

Using row covers is a great way to keep all sorts of pests off your plants. I recommend row covers to keep the cabbage worms at bay. The only problem with row covers for controlling these nasty beetles is they attack fruit trees and berry bushes which can be difficult to cover.

6. Attract Beetle Eating Birds, Insects, and Mammals to Get Rid of Japanese Beetles

Instead of resorting to harmful pesticides for pest control, try attracting beetle-eaters to your garden. Certain birds, insects, and mammals can help rid your yard of these pests working as beneficial insects and natural predators.

Attracting insectivorous birds to your yard can be as simple as putting out a birdbath and possibly a seed-feeder and nest-boxes near infested plants. Starlings are the best-known beetle-killers, as they consume both the grubs and the adult Japanese beetle.

Purple martins are easily attracted to man-made nests and eat the grubs of the Japanese beetle. It is helpful to the birds if you turn the soil in autumn, exposing the larva. Both chickens and guinea fowl are supposed to eat Japanese beetles. Although my lovely backyard birds often turn up their noses at the beetles, but they love to eat the grubs.

Beetle-Eating Animals and Other Insects

Shrews, skunks, and moles feed on Japanese beetle grubs and are frequent visitors to suburban gardens. Spiders, ants, and other predatory insects eat large numbers of beetle eggs in the soil even before they hatch. In this manner, eschewing the use of pesticides is actually helpful in eliminating beetles.

The spring tiphia wasp was imported from China to control Japanese beetles in the United States. The female wasp burrows into the soil and lays its eggs on top of Japanese beetle grubs.

When the eggs hatch, the baby wasps eat the beetle grubs. Istocheta aldrichi, a tachinid fly, is another species that operates the same way. These look like houseflies, but unlike pesky houseflies, they prefer to remain outdoors

There is no way to prevent Japanese Beetles as they will fly from great distances to destroy your property. You can strive to avoid plants they love: including Norway and Japanese maple, hollyhock, gray birch, fruit trees, roses, and chestnut.

You can also try to surround your property with trees and plants they don’t like. Here’s a list of trees and bushes they don’t eat all that much:

Unfortunately, they’ll still fly through this vegetation, so to use plantings as a way to discourage them, you might need a lot of acreage. Plant a large variety of the above mentioned trees and bushes in a  staggered pattern tree line with multiple height layers to really get this to work.

How to Grow Garden Vegetables Series

Want to learn how to grow all the garden vegetables? Check out my How to Grow Series and learn to garden like a champ! More posts coming soon!

Click here to cancel reply.
As an Amazon Associate Michelle Marine, SimplifyLiveLove, earns from qualifying purchases. SimplifyLiveLove is a participant in the Amazon Services LLC Associates Program, an affiliate advertising program designed to provide a means for sites to earn advertising fees by advertising and linking to amazon.com.

Michelle Marine is the author of How to Raise Chickens for Meat, a digital content creator, and writer/editor of Simplify, Live, Love. She inspires families to simplify their lives through eco-friendly living, modern homesteading, and sustainable family travel while still enjoying life’s modern conveniences like dishwashers and airline travel!